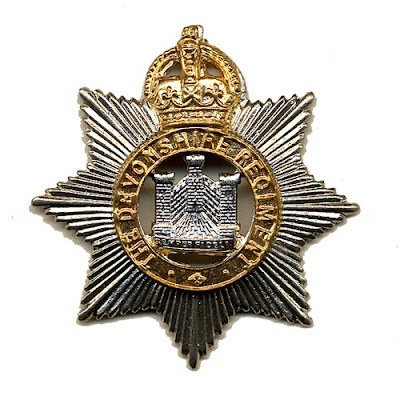 Four men from the Lower Otter Valley lost their lives on 25 September at the Battle of Loos. This was a combined Anglo-French offensive intended to break through the German defences in Artois and Champagne in NW France and restore a war of movement.

Above: 'Gassed', a very large oil painting completed in March 1919 by John Singer Sargent. It depicts the aftermath of a mustard gas attack during the First World War, with a line of wounded soldiers walking towards a dressing station. Sargent was commissioned by the British War Memorials Committee to document the war and visited the Western Front in July 1918 spending time with the Guards Division near Arras, and then with the American Expeditionary Forces near Ypres. The painting was finished in March 1919 and voted picture of the year by the Royal Academy of Arts in 1919. It is now held by the Imperial War Museum

The action saw the first British use of poison gas, with disappointing results.  “It will be seen that the attack with gas was not the success that had been anticipated,” wrote the Special Correspondent of the Western Morning News of 5 April 1919. “It lacked the element of surprise as to the exact moment it was to be launched.  A favourable wind was an important feature in the days when gas clouds were the vogue.”

For the Devonshire Regiment there were some memorable achievements. Despite German shelling and British gas blowing back on them during the attack, the 8th Battalion pressed on with their attack and captured the German position.

The 9th followed in support, losing a great many men to machine gun fire as they crossed No Man’s Land to join the 8th in their stretch of German trench.  The survivors of the two Battalions held the position until the evening of 26 September, when they were withdrawn.

The two Battalions succeeded in capturing German field guns, two of which were brought back to Exeter to be paraded in the streets. 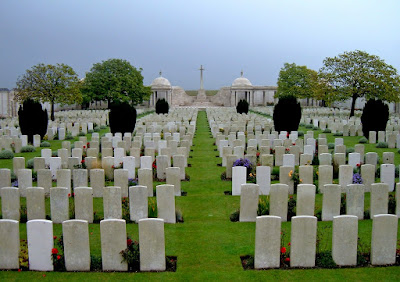 But the ultimate result was a stalemate, with heavy losses on both sides. In this single battle the 8th Battalion suffered 639 casualties, and the 9th 476.

“We had a terrible time starting on the 25th September,” wrote Private Dennis in the Western Evening News of 13 November 1915.  “We lost over 600 men and all the officers that went with us.  I never felt more proud of Devonshire men than I do today.  When we were all lined up waiting for the word to charge (of course we were in the first line of trenches all night, it was 6.20 when we got the order to charge), not a man failed.  When we got over the parapet we were met with a terrible rifle and shell fire, gas, and barbed wire.  The enemy seemed to know what we were going to do.”

All four men from the Lower Otter Valley are commemorated on the Loos Memorial, near the village of  Loos-en-Gohelle, five kilometres north-west of Lens. The Memorial forms the sides and back of Dud Corner Cemetery.

Samuel Keen was born in Cheriton Fitzpaine in Mid Devon in 1879. He was the son of dairy farmer Samuel senior and Charlotte Keen, who had seven children.The 1891 census shows the family living at Brook Farm, Tiverton, but young Samuel later became a waggoner and a resident of East Budleigh, although his name does not appear on any memorials in the village. He was 35 years old when he was killed. 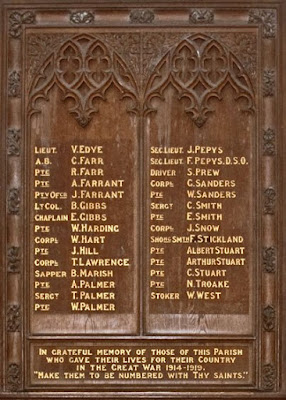 The War Memorial in All Saints Church, East Budleigh

Private Arthur Palmer was an East Budleigh man, born around 1874. He was the son of Alfred and Mary Jane Palmer and had a brother, William, who would die two years later, on 23 August 1917.  Arthur Palmer left a widow, Jeanette, but has no known grave. However his name appears on war memorials in Exmouth and in Seaton as well as on the All Saints Church memorial in East Budleigh.

Private Charles Stuart’s name also appears on All Saints Church memorial, tragically next to those of his two brothers Arthur and Albert, who were killed  in 1916 and 1917 respectively.  All three were the sons of William Henry and Elizabeth Ann Stuart, of Brookside Cottage. Charles was aged only 20 when he died.

Twenty-two-year-old Private William West was the fourth man from the 8th Batallion to be killed in action on 25 September 1915. The 22-year-old  was the sixth of 13 children born to John and Amelia West and grew up in East Budleigh.  His mother’s maiden name was Sanders. 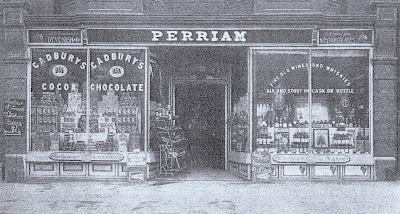 By 1911 the family had moved to Budleigh Salterton; when William died they were living at 12, Cliff Road. His father John was a van man for Perriams, the town’s grocery store, where William worked as an assistant before he enlisted. 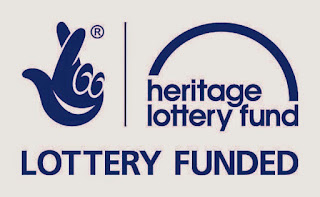 Michael Downes
Born in 1946, in Birmingham UK, of Scottish-Irish parentage, and brought up as a Roman Catholic. Early education may have driven me into teaching, in the belief that schools should offer a more enjoyable experience for children. Studied French at London University, specialising in 16th century literature. Then came 34 years of teaching French, along with red herrings and common sense, at Oundle School. Dabbles, and some people say meddles, in many areas. A passionate gardener, moved to Devon partly to grow ericaceous plants more easily. Other interests include family, cycling and walking. Published articles in Etudes Rabelaisiennes, (a long time ago), and some books - 'Oundle's War' (1995) - 'The Scientist in The Cottage' (2013) - a biography of Henry Carter FRS (1813-95), 'Our Little Clown' (2016) - a biography of Reg Varney - photography, reading, music, studying butterflies, chopping wood, DIY, playing on the scaffold tower, and networking for the Greater Good. Married to Anthea for over 50 years. Three children: Emily, Simeon and Rosanna, four grandchildren and two Bengal cats. I'm a cancer survivor – I hope!